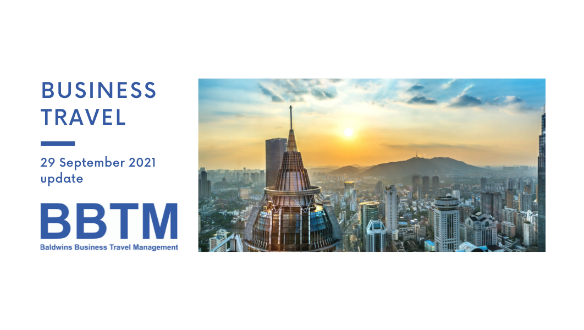 From 4am Monday 4 October 2021, the rules for international travel to England will change from the red, amber, green traffic light system to a single red list of countries and simplified travel measures for arrivals from the rest of the world. The rules for travel from countries and territories not on the red list will depend on your vaccination status. For more information on travel from rest of world for vaccinated and non-vaccinated travellers, click here

The United States will reopen in November to air travellers from 33 countries including China, India, Brazil and most of Europe who are fully vaccinated against COVID-19.

The United States will admit fully vaccinated air travellers from the 26 so-called Schengen countries in Europe including France, Germany, Italy, Spain, Switzerland and Greece, as well as Britain, Ireland, China, India, South Africa, Iran and Brazil. The unprecedented US restrictions have barred non-US citizens who were in those countries within the past 14 days.

Further information is expected about the exact date that the US will open their borders as well as details of vaccination status’ allowed.

From 1 October 2021 EU, EEA or Swiss national ID cards will no longer be valid for travel to the UK unless travellers live in the UK and have settled or pre-settled status. Passports will be mandatory for all other passengers including children.  Passengers with settled or pre-settled status can continue to use national ID cards until 31 December 2025.  For more information, click here

The Department of Homeland Security’s Transportation Security Administration has increased the penalties which can be imposed on travellers if they fail to wear face masks when required. The TSA has increased the range of civil penalties that may be imposed on individuals who violate the federal mask mandate at airports, on commercial aircraft, and in various modes of surface transportation, including passenger railroads, intercity bus services, and other public transportation”.

AIRLINE & RAIL NEWS - information is correct at time of distribution

British Airways (BA) has confirmed that it has abandoned its short-haul Gatwick operations.  This gives EasyJet, Norwegian and Wizz Air a golden opportunity to expand services at the UK’s second busiest airport.

Pegasus expands in the UK

Pegasus has reinstated twice daily direct flights from Stansted to Istanbul Sabiha Gökçen Airport, on the Asian side of the Bosporus.

Five-times weekly direct flights are now also operating from Manchester Airport to Sabiha Gökçen.  Both routes offer excellent onward connections across Pegasus’ network of 36 destinations in Turkey, including to the popular coastal resorts of Bodrum, Dalaman and Antalya.

Pegasus will be launching direct flights between Stansted and Antalya for the winter season on 20 October followed the next day with flights to Izmir on Turkey’s Aegean coast.

As well as an extensive network in Turkey, Pegasus Airlines also flies to 119 destinations in 44 countries, including destinations such as Dubai, Tel Aviv and Sharm el-Sheikh.  Established in 1989, today Pegasus is listed on the Istanbul Stock Exchange and has a fleet 92 aircraft.

Fully-vaccinated people travelling to Scotland from overseas will no longer have to take pre-departure Covid tests, the Scottish Government has confirmed.

The change will benefit Scots returning home from abroad and visitors from non-red listed countries.

Scotland will also "align with the UK post-arrival testing regime" but details have still to be finalised.

This is an about-turn by Nicola Sturgeon’s Government.

Last week the Scottish Government said that testing requirements would remain due to public health concerns.

With flights returning to some kind of normality Aurigny, owned by the States of Guernsey, held a press briefing last week setting out its plans for the future.

Now officially Ireland West Airport (NOC), and famously founded by Monsignor James Horan, the story of which has even inspired a musical, Knock has gained twice weekly year-round services to Manchester and Edinburgh with Ryanair.

Flights to Gatwick with Aer Lingus return on 31 October on a daily basis.

All these new services will provide a major boost for the airport and the region as it restores critically important connectivity between the north-west of Ireland and Manchester and Edinburgh.

The airport’s location is the most convenient for Sligo, the nearest town, about 30 miles away, and Donegal a further 30 miles onwards north-west.

Ryanair now offers passengers a choice of 13 destinations across the UK and Europe for the balance of the 2021 season.

A brand new train operator is to be launched on 25 October called Lumo, owned by First Group, operators of Great Western Railway (GWR) and Hull Trains.

Lumo says that the new operation will add annually over one million additional passenger journeys to the East Coast Main Line per year.  Its target is the airlines claiming rail travel generates six times fewer carbon emissions than travelling by plane.

Helen Wylde, Managing Director for Lumo, said: “Travelling in the UK should not cost a fortune and it certainly shouldn’t be the planet that pays. Whatever your preferred mode of transport, we are likely to be more affordable and kinder to the planet.

“We believe everyone has the right to travel in style. We are empowering people to make green travel choices that are genuinely affordable without compromising on comfort.”

Lumo has invested £15m on digital and IT infrastructure and £100m on the manufacture and maintenance of five brand new single class, state-of-the-art Hitachi AT300 intercity electric trains.  There will be an at-seat catering service from LumoEats, simplified fares, free wi-fi, paperless ticketing, and a new entertainment system.

Don’t hold your breath, but Qantas says it plans to restart international flights in time for the Christmas holidays.

The target date is 18 December, in line with ‘Phase C’ of the National Cabinet’s plan, which involves the gradual reopening of international borders once Australia reaches an 80% vaccination rate expected by that time.

The plan is to reintroduce services from Sydney to London, Los Angeles, Singapore and Vancouver.  Melbourne also starts, the London flights presumably operating as previously via Perth, with Singapore returning too.

The resumption depends, of course, on whether the federal government relaxes international border restrictions as per the National Cabinet’s plan, and which countries are on the Australian’s OK list.

Last week Chief Customer Officer, Qantas, Stephanie Tully, told a webinar “If it’s 14 days’ hotel quarantine, we will not get the demand we need to operate. Hotel quarantine is a demand killer.”

“Our view is hotel quarantine should be eliminated or greatly reduced.”  Only flights between Australia and New Zealand are on sale at present, for travel from mid-December 2021.  This assumes some or all borders between the two countries will reopen.

Scots will be able to fly seven days a week to Toronto for next summer.

Canadian airline WestJet has made the decision to operate from both Scottish airports, Edinburgh on Wednesday, Friday and Sunday; Glasgow Monday, Tuesday, Thursday and Saturday.  All flights will be on a Boeing 737 MAX.

The Canadian carrier will also reinstate the popular Halifax route from Glasgow four times weekly in May.  It is also keen to point out that through Pearson International Airport, Toronto, it serves over 30 Canadian destinations.