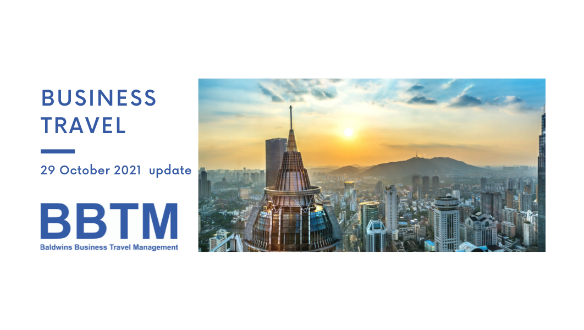 Morocco bans flights from the UK, Germany and Netherlands

Morocco has banned incoming and outbound flights between the country and the UK, Germany and the Netherlands, following concerns over rising rates of Covid-19.  The UK government has updated its foreign travel advice for Morocco.  Click here for more information.

Dubai International (DXB) has made food ordering and duty-free shopping easy with the launch of DXB&More, a regional airport first.  It means passengers can make the most of their time before catching a flight by ordering retail and restaurant items on their mobile, without needing to download an app, and having them delivered directly to them. More information can be found by clicking here.

Easyjet has launched a competition inviting children to design a zero-emission aircraft.  The competition is calling on school children up and down the UK, aged from 7 – 16 to design a passenger plane for travelling across Europe, powered by a sustainable energy source.  The airline says the competition aims to engage younger generations and inspire them to become part of the revolution of future air travel as aircraft designers and engineers.  More information can be found by clicking here.

London Gatwick is using sustainable aviation fuel (SAF) on all Easyjet flights during the COP26 climate conference in Glasgow this year. The first of a total of 42 Easyjet flights departed on 19 October 2021 and was powered by a 30 percent Neste SAF blend. It is the first time a departing flight at Gatwick has used sustainable aviation fuel (SAF) and also the first usage by any easyJet service from the UK.  The COP26 Climate Change Conference runs from 31 October to 12 November in Glasgow.

Travel news as a glance:

British Airways’ customers will be able to fly to more destinations across Africa, thanks to a new codeshare agreement with Kenya Airways.

Interestingly BA is a member of oneworld with Kenya Airways part of Star Alliance.  In times of crisis even old rivals get together.

Customers to Nairobi with British Airways will be able to seamlessly connect onto 20 destinations across East and Central Africa, including Addis Ababa, Douala, Entebbe, Lusaka, Mombasa and Zanzibar, as well as offering customers more options to get to popular holiday hotspots, Mauritius and Seychelles.

In the reciprocal agreement, customers flying with Kenya Airways to London, will now be able to connect onto 26 destinations across the UK and Europe that BA operates to, including Amsterdam, Frankfurt, Glasgow, Madrid and Milan.

BA currently offers four flights a week from Heathrow to Nairobi, operated by a four-class Boeing 777 aircraft, with cabins from World Traveller (Economy) right up to First (First Class).

South Africa, always a popular destination during the winter, is to gain extra flights for the year-end holiday period.  It is on the British green list for the return and for entry proof of a negative PCR test is required.  A visa is not necessary for tourists.

British Airways (BA) and Virgin Atlantic will offer flights to both Johannesburg and Cape Town.

With BA there is a minimum of daily non-stop 11hr 35min services to South Africa’s largest city and for the southern capital three times weekly taking 11hr 45min.

With Virgin Atlantic from 8 November, flights from Heathrow to Johannesburg will increase from three times a week to a daily service.

The relaunch of the airline’s Heathrow to Cape Town service is also being brought forward, following a huge surge in customer demand.  From 17 December, Virgin Atlantic will fly three times weekly to the destination famed for its breath-taking scenery and its world-famous wine region.

Virgin Atlantic’s South African services will both operate on the airline’s state-of-the-art Boeing 787-9, with 31 Upper Class, 35 Premium and 192 Economy Delight, Classic and Light seats. Flights are available to book now from £478 per person return to Johannesburg, and Cape Town services go on sale from 16 October from £578 per person return.

Virgin Atlantic offers unlimited free date and flight changes for new bookings as part of a series of enhancements to give further flexibility to customers and support their future travel plans.

With regards to South African Airways – despite many press releases with regards to a resumption of their services, they are not currently flying into London.

Claimed to be the nearest budget property to Heathrow T5, Accor Group has reopened after a redesign of its Horton Road Colnbrook guesthouse, as a dual branded ibis and ibis budget hotel.  It is about 5min from the terminal by Junction 14, of the M25 and served by a Hoppa Bus to the airport.

One of London’s lesser known 4-star hotels, The Crowne Plaza Blackfriars is to reopen on 1 March.  It has been closed since the start of the pandemic.

In a very good but not obvious location, IHG has taken the decision to re-brand the property as a Hyatt Regency following a major makeover. The hotel has 204 rooms and previously limited conference facilities.

The hotel is opposite Blackfriars Station with direct train services to Gatwick and also the Circle/Metropolitan Line with its various connections.  St Paul’s Cathedral is about 5mins walk and directory across the River Thames is the Tate Modern Art Gallery.

Bookings have not opened as yet and the new property will join The Churchill and New Scotland Yard as the premier Hyatt Regency London properties.

Aer Lingus and Singapore Airlines are both getting back into business with long-haul flights from Manchester Airport.

The Irish airline is very busy with three new destinations – Barbados, which started last week and is three times weekly, from 1 December twice weekly to JFK New York, and to Orlando, all flights are non-stop direct..

Singapore Airlines’ history with Manchester Airport has been one of the longest on record having operated continuously since 1986, until the Covid-19 pandemic forced 98% of its flights globally to cease.

Singapore Airlines originally launched its transatlantic services to Houston in 2016, during the Airline’s 30th year of Manchester operations. In 2017, the airline introduced the first commercial A350 flight from Manchester Airport, as the aircraft also debuted on the Singapore – Manchester – Houston route.  From 1 December the airline will again operate to Houston, three times a week over the winter period.

From Monday 1 November, the charge of £5.00 has been introduced.  Taxi drivers will add the sum to their bill.

The Terminal Drop-Off Charge is only payable online, via an automated telephone service or via autopay. It cannot be dealt with at an airport ticket machine or in the terminal drop-off zones.  The fee is applied via Automatic Number Plate Recognition (ANPR) – there are no barriers.

All the terminals will be covered by the scheme.

Exemptions are available “for blue badge holders, operational vehicles, emergency services, motorcycles, coaches, and (what it calls) colleague buses,” but you need to register before you travel. You are required to supply the vehicle registration number, visit date, badge number, flight number and an image of the front and rear of blue badge plus of course an email address. The good news is that it can be done retrospectively up to midnight the day after the trip.  But is it worthwhile for the £5 fee involved?

You cannot pick up passengers in the drop-off zones but with all the terminals short-term parking is close by and easy with charges starting from £5.10p for the first 29 minutes.

The Government has confirmed that a lateral flow antigen test (LFT) have replaced the day two PCRs.

The change only apply to fully-vaccinated travellers. Those who are not double jabbed must continue to use polymerase chain reaction (PCR) tests. Check with your destination country before travelling.  The antigen test will not be accepted for travel to Hong Kong, Jamaica and Singapore.


Until now the free NHS tests have been available for travel but you must now use one of the Government’s approved private providers. This questions the value of the Chinese-manufactured packages currently available.

The cost of an LFT tends to be between £20-40. The Government has announced aa approved list of private providers, BBTM recommend the following company –

After 75 years Alitalia has finally been grounded and replaced by Italia Trasporto Aereo (ITA).

ITA’s maiden flight was from Milan to Bari. The new carrier, in which the government will invest €1.35bn over three years, will start with 52 jets and 2,800 employees, compared with around 110 aircraft and a workforce of 10,000 for Alitalia.

Under a deal with the European Commission, ITA will be economically independent and will not be liable for any illegal state aid received by Alitalia in recent years.

The new carrier will also have to be profitable by the end of its 2021-25 business plan and, according to chair Alfredo Altavilla, will be on the hunt for a deal with a larger airline before the end of 2022 because it is too small to stand alone. CEO is Fabio Lazzerini, formerly Chief Business Officer at Alitalia, and from 2013 until 2017 Director General of Emirates Italia.

News from ‘Down Under’

With flights planned between London and Darwin there is now hope for family travel ‘Down Under’ for the Christmas holiday period.

Commencing Friday 5 November, Qantas will start with two flights per week on Fridays and Sundays. From 1 December, this will ramp up to six flights per week to deliver Aussies home just in time for Christmas.

Sydney, New South Wales (NSW), will open up to fully vaccinated international travellers from 1 November without the need for quarantine.  Each of the Australian States has its own rules.

Australia closed its borders in March 2020 in response to the pandemic, allowing entry almost exclusively to citizens and permanent residents who were required to undergo a mandatory two-week hotel quarantine at their own expense.

“We need to rejoin the world. We can’t live here in hermit kingdom. We’ve got to open up,” NSW Premier Dominic Perrottet told reporters.

Australia’s Prime Minister Scott Morrison said earlier this month overseas travel would return once 80% of people in a particular state were fully vaccinated, but would be available initially for Australians and would require home quarantine.

As of last week in NSW, the number of people fully vaccinated has already reached 77.8%, while 91.4% have received at least one dose of the Covid-19 vaccine.

A surprise major award winner of the 2021 Skytrax awards was Saudi Arabian Airlines as the World’s Most Improved Airline.

Taking first place for the sixth time as The World’s Top Airline was Qatar Airways, followed by Singapore Airlines, and moving up ANA. No British airline featured in the major categories with the exception of Virgin Atlantic for its Inflight Entertainment and easyJet in the Low-Cost class, won by AirAsia.

With all the lockdowns and travel restrictions the Skytrax customer survey covered 23 months (September 2019 to July 2021).

The World’s Most Improved Airlines 2021

Now claiming to be the world’s largest international airline Dubai-based Emirates will resume services to its second London gateway with a daily service from 10 December.
Operated by a Boeing 777 aircraft, across First, Business and Economy class flight EK016 will depart LGW at 13:35 and arrive at Dubai International (DXB) at 00:40 the following day, perfect for onward connections. Also ideal with Dubai’s incoming services during the night, Flight EK015 will leave its home base DXB at 07:40 and arrive in LGW at 11:40.  The airline has its own lounge at the airport (all times local).

The addition of LGW will restore Emirates’ UK operations to a further six gateways: Birmingham, Glasgow, Heathrow, Manchester and Newcastle.