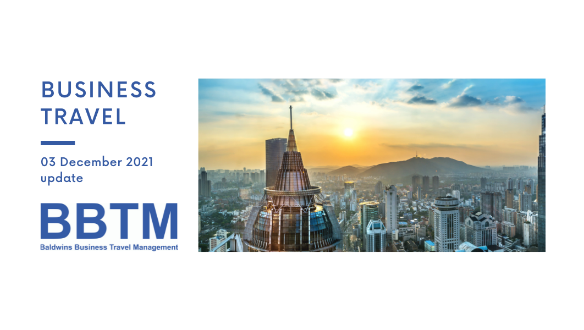 Customers currently overseas who are due to arrive back in the UK from 4 am Tuesday 7 December are advised that the UK inbound rules have changed and that from 4 am Tuesday 7 December, anyone travelling to the UK from countries, not on the Red List will be required show proof of a negative PCR or lateral flow (LFD) pre-departure test, taken no earlier than 48 hours before departure. This applies to vaccinated passengers and children aged 12 and above. Please contact us should you require any further information.

From early next week (commencing 6 December - exact date to be confirmed) all international arrivals by air will be required to present a negative pre-departure COVID-19 test, taken within one day (24 hours) of departure to the US, regardless of nationality or vaccination status.

Pre-departure tests for the US can be at-home/remote, providing it’s via a telehealth service affiliated with the test manufacturer (i.e. video-observed) or administered in-person by a health professional. Lateral flow (antigen) and PCR tests are both accepted.

Please continue to check the US Center for Disease Control and Prevention (CDC) website which will be updated with the latest entry requirements.

Arriving in England after 4 am 30 November

If you are fully vaccinated and arrive in England, you:

Just a reminder to please locate your passport and check its expiry date, since Brexit you must have at least 6 months validity left on your passport from your date of return.

If you are using Heathrow over the Christmas weekend be very careful regarding travel to and from the airport.

The UK's busiest airport will have no London Underground, Heathrow Express or TfL Rail (Heathrow Connect) services for the two days due to major engineering work.  There will be a special bus operation from Hammersmith and all other routes will operate as per normal for the holiday.

Christmas Day is a Saturday, with Sunday and Monday (26 and 27 December) official Bank Holidays.

WestJet has announced plans for a new service between its home base Calgary and Heathrow in competition with Air Canada.

Schedules and pricing are yet to be announced but will be available in the coming weeks. Westjet is Canada’s second-largest airline behind Air Canada and operates three-class Boeing 787 Dreamliners.

Scoot to arrive at Gatwick

The low-cost subsidiary of Singapore Airlines is to arrive at Gatwick Airport.

The new service will commence with flights from 16 December 2021. This will be followed by three times weekly scheduled seasonal services from March 2022.

All services will be operated by Scoot’s widebody Boeing 787 Dreamliners offering both Economy and ScootPlus cabins, sporting features such as inflight wi-fi and the ability to upgrade to Scoot Plus or to Scoot-in-Silence – Scoot’s offering of a quiet-zone.

With the opening up of the US, Aer Lingus is to resume transatlantic flights from Dublin to San Francisco.

The London – Cornwall daily air route is to return, its non-operation over the last 18 months a consequence of the Flybe failure in March 2020. British Airways operated Heathrow – Newquay as a limited summer-only sector the last two seasons.

The route will be flown by Eastern Airways twice daily to and from Gatwick by mid-January.  In the meantime, there will be a single ATR turboprop flight from 15 December to cover the holiday period.  Eastern is an established operator into Newquay, the former RAF St Mawgan, with an all-year-round service from Leeds Bradford Airport.

Now back flying three times weekly between Gatwick and Toronto.

Flights to Montreal are due to resume in May, with daily services from June to September. New for 2022 is an exclusive weekly flight to Quebec City which will operate every Thursday from May to September.

Toronto from Manchester recommenced on 20 October and will restart from Glasgow on 16 December. At the height of summer, four weekly flights will be offered from both Glasgow and Manchester as well as Gatwick to Toronto daily.

Airside transit is when you do not pass through United Kingdom border control.  You remain ‘airside’ before you leave the UK on your connecting journey.  It is also called ‘connecting’ and Heathrow in the past has thrived with up to 30% of passengers changing flights.  In the Middle East, both Doha and Dubai international airports prosper on this throughput, said to be 80% of all business.  The shops do well also.

From a legal point of view, passengers are not technically in a country if ‘airside’.  In the United States, all travellers must go through immigration and go ‘landside’.

New government guidelines have been issued, which mainly affects Heathrow.

If you transit airside, you do not need to take a Covid-19 test before you travel if you qualify as fully vaccinated for travel to England or have not been in a red list country or territory in the ten days before you arrive in England.

If you do not qualify as fully vaccinated or you have been in a red list country, you need to take a Covid-19 test in the three days before you travel to England.

You do not need to complete a passenger locator form before traveling to England.

If you are transiting for up to 24 hours but going landside other rules apply.

With the British Foreign Office urging Britons to leave Ethiopia, air services at Addis Ababa Airport are being questioned.  Ethiopian Airlines continues to fly daily to Heathrow with Boeing 787 Dreamliners used on the route.

The US Federal Aviation Administration last week advised American carriers to exercise caution while flying into or near Addis Ababa, as a year-long war moves closer to the Ethiopian capital.

Called Bole locally the international Airport is one of the busiest in Africa.  State-owned Ethiopian Airlines is said to be the world’s fourth-largest airline by the number of countries served. It has a fleet of around 130 aircraft including both the 787 and Airbus A350 and 32 de Havilland Q400 used on domestic services.  It is the many times' winner of various Skytrax awards.  The airport-based training academy attracts airline customers from all over the globe.

From 1 November quarantine was lifted for visitors to the Australian states of New South Wales and Victoria.

Since March 2020, the country’s international border has been effectively closed to minimise the spread of coronavirus, and Australia is the only democratic nation to prohibit its own citizens from leaving.

With 74.8% of those over the age of 16 now fully vaccinated, the Prime Minister has revealed when the borders will open.

“By the end of the year, we’ll be able to welcome overseas visitors, including backpackers who are double-vaccinated,” Scott Morrison told Parliament.

According to the national re-opening plan agreed upon by all states and territories in August, once 80% of those over the age of 16 have been vaccinated, there would be a “gradual opening of inward and outward travel with safe countries.”

Tasmania and South Australia will likewise waive quarantine restrictions for fully vaccinated visitors beginning on 15 December and ending at the end of the year, respectively.

Queensland will maintain its quarantine requirements until 17 December, when overseas visitors who have been properly vaccinated and have returned a negative test will be allowed to return home quarantined. It plans to eliminate quarantine for fully vaccinated travellers once its immunisation rate hits 90%, which is expected in early 2022.  No dates have been announced for Western Australia or the Northern Territory.

New Zealand is to reopen to tourists vaccinated against Covid-19 but in stages.

The border will initially open to New Zealand citizens and visa holders coming from Australia, then from the rest of the world.  Depending on where visitors are coming from different rules apply but they will still have to self-isolate for a week.

It will be the first time the country has been open to travellers since Prime Minister Jacinda Ardern announced a snap closure in the first month of the pandemic last year.

Ardern also confirmed that residents of Auckland will be able to leave the city from mid-December after months of Covid-19 lockdown travel restrictions.

New Zealanders can travel home from Australia without staying in managed isolation from 17 January.

They can come from all other countries from 14 February.

After that, fully vaccinated people, including international tourists, will be able to travel to New Zealand from the end of April.

Countries classed as “very high risk” will be excepted from that – at this stage, only Papua New Guinea sits under that designation.

The International Air Transport Association has called on governments to simplify air travel, with complex measures having created a “barrier to global mobility.”  The body has issued a policy paper entitled From Restart to Recovery: A Blueprint for Simplifying Travel which calls on governments to “safely and efficiently manage the ramping-up of international travel” through a focus on three key areas: simplified health protocols, digital solutions to process health credentials, and Covid-19 measures proportionate to risk levels with a continuous review process.

The European Commission has proposed a nine-month time limit on vaccination certificates for travel to and within the European Union. According to the proposals, travellers would have to show proof of a booster jab once their vaccine status is more than nine months. This would apply from 10 January 2022 and would allow test- and quarantine-free entry to the member states.

The Commission is also favouring a “person-based” approach to travel measures, rather than one based on travellers’ country of departure, to ensure consistency across the bloc. Under its proposals, people with a valid EU Digital Covid Certificate would not be subject to tests or quarantine “regardless of their place of departure in the EU.” Those without the certificate may be required to undergo a test prior to or after arrival. For more information, click here.

Travel news as a glance:

As ever please check with us before making any confirmed bookings as the rules and regulations for travel are continuously being updated.